I am so fortunate that Reno is home to the nation's biggest and most successful auction of Western art! Every July, hundreds of collectors from Maine to Hawaii flock here to eagerly spend millions of dollars on important works by Frederic Remington, Charles M. Russell and other celebrated painters of the old west, as well as some works by more contemporary artists. I doubt if attending an auction at Sotheby's or Christie's could have been more exciting than attending the Coeur D'Alene Western and American Art Auction at the Peppermill Resort this past weekend.  With some art valued in the millions of dollars and lots of art valued at several hundreds of thousands - it all set my heart to beating fast! Friday night was the auction preview and cocktail party. I read that over 45 private jets landed at Reno Airport with people flying in from all around the country to participate - that is why it was moved from Coeur d'Alene in 1999 - their airport could not handle all the traffic for the show.

I devoured the images and text in the auction catalog cover to cover so I could be somewhat familiar with the art and the artists as Western art is not my usual cup of tea. I had a lot to become familiar with and to learn. When I saw, rather incongruously,  that a Fechin charcoal portrait drawing was on the auction block, I fell in love with it and rashly decided to register to bid. Paddle # 201 - that was me! 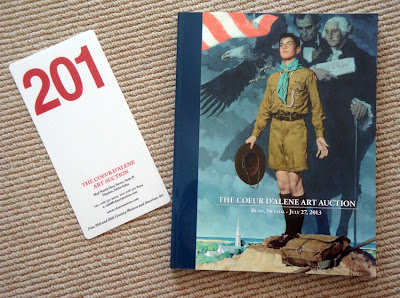 The 314 framed pieces and sculptures were set up in the Grand Exhibition Hall on long tables that circled  and ran up and down the length of the room. All pieces were identified by their lot number so it was easy to follow along in the catalog if you so desired. The room was cavernous and the quantity of art overwhelming. I took the photos in a moment of relative quiet as the preview was very well attended but the crowd was not crushing. Beverage stations were set up with wine, mixed drinks, sodas and water and the cocktail table buffet opened up at 6. The food was very nice - mushroom caps stuffed with spinach and cheese, tiny quiche lorraine, lamb chops and chicken skewers with special sauces, carved beef and turkey, crab cakes - something for everyone. 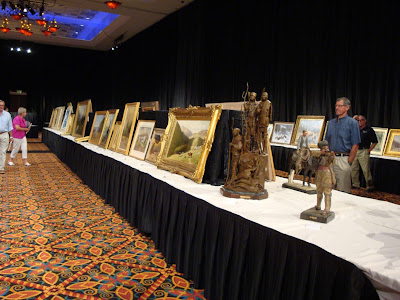 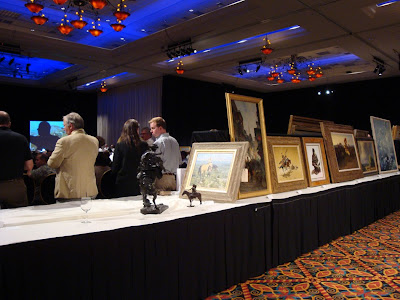 Peter Stremmel, one of the founders of this auction in 1989 and the owner of the Stremmel Gallery, was the auctioneer. It took a few lots before I caught on to the process and could understand the bidding. Each lot, no matter the size or value, took approximately 1 minute to auction - it was a furious pace! I would guess that between 700 and 1000 art buyers were present and each piece generated a flurry of bidding. There was also a telephone bank and line of computer terminals so, in addition to those who were present, there were plenty of bidders on the phones and internet. 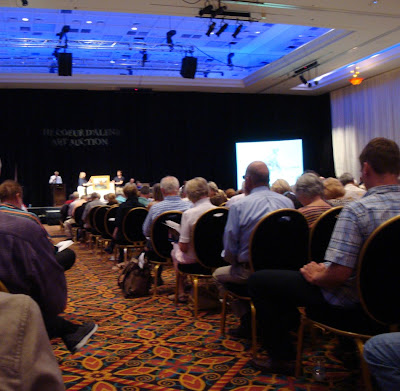 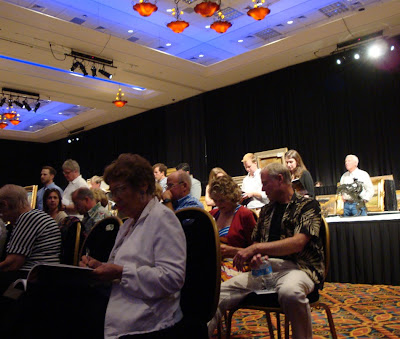 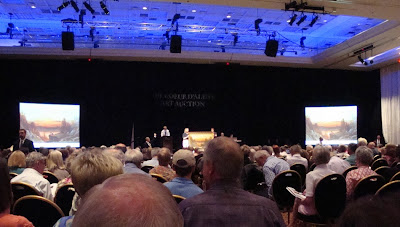 As the auction proceeded, each piece was carefully brought up to the front and placed on a rotating table with its image projected onto two large screens at each side of the stage so every one had a great view. Located throughout the crowd were "yippers". These are auction employees who identify the people who are bidding for each piece and bring their bids to the attention of the auctioneer with a series of loud "yips"! When a lot of people are bidding on one piece, the exhibition hall was ringing with the sounds of the yippers and the constant patter of the auctioneer. I was amazed that everyone seemed to know exactly what they were doing and what the price was at each second of bidding - what a challenge! 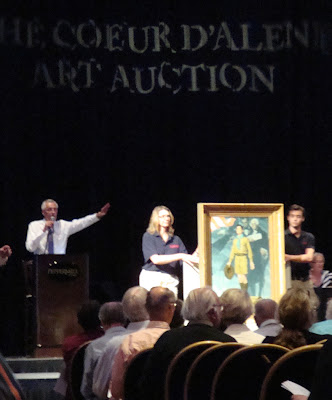 This large,  beautifully precise painting by Norman Rockwell was painted in 1940 and graced the cover of Boys' Life magazine in 1942. It generated some very frantic bidding and when the dust settled, the new owner paid $3.8 million dollars for it! 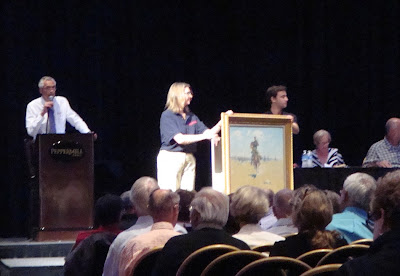 Probably the most exciting event of the evening was the auctioning of Fredric Remington's breathtaking piece called Cutting Out Pony Herds (A Stampede) painted in 1908. Remington died in 1909 and this painting was kept by Collier's magazine until 1913 when it appeared on the February cover. The story of the painting is that an Army Trooper was sent to fire his revolver while riding around a herd of Indian ponies in hopes of stampeding them. This would make the Indians more vulnerable to attack. I don't think it took 45 seconds to sell this piece. There were many bidders but in the end one gentleman in the crowd purchased it for a long, cool $5 million dollars. Here is a photo of him after he had won the bid - he is the dark haired man standing in the back on the left. 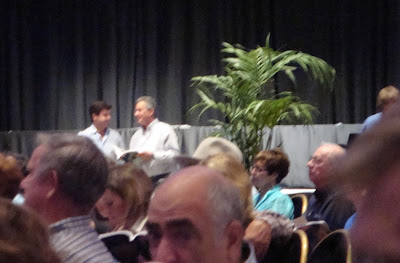 Some other art that caught my eye:


And finally,  the very fetching Fechin that captivated me and I wanted for my own!


Even though it was not meant to be mine, it was an incredible experience to bid, to have a yipper shouting out my bids and to be involved in all the excitement. I can hardly wait for next year!
Posted by Susan at 3:12 PM 15 comments:

Occupying a State of Rest and Some Life Sketches

Having some fun with bright sunlight and large shapes.

Kim modeled for us during last weeks portrait session at Nevada Fine Arts.  I sketched her in profile and then a slight 3/4 view. 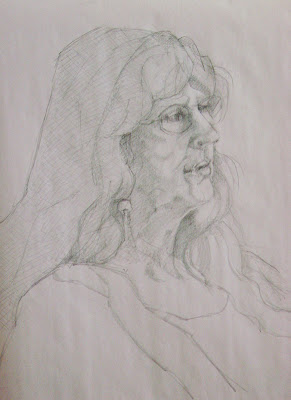 This has been a very exciting weekend for me. On Friday night I attended the cocktail reception of the Coeur d'Alene  Western and American Art Auction that is held annually here in Reno, NV.  There were 308 paintings up for sale and I spent a long time viewing the art. It was so inspiring. The auction was held yesterday and it was more exciting than I can even begin to describe - the bidding is so fast and furious and the prices skyrocket in  a matter of seconds! I took a few photos and will try to put them into my blog over the next day or two. I even found myself bidding on a charcoal drawing by Nicolai Fechin that caught my attention! I was very quickly outbid but it was a grand experience!
Posted by Susan at 11:57 AM 13 comments:

Persevering in a State of Rest

Having spent about 3 sessions on this picture, I think I am done now. It was a lot of fun to compose and to paint and I have titled it "Persevering in a State of Rest". In the studio shot, which I included for perspective, you can see the wonderful overhead white LED lighting that we installed in my studio - there are 8 of those pot lights thoughtfully placed and, as a result, I have wonderful, shadow free lighting at any time of the day or night. My son visited from San Diego last week and while he was here he installed casters on my big easel and on my work table giving me much more flexibility when I work. I can't tell you how long I have wanted wheels on my easel so I can move it around as needed! I am happy now!
Posted by Susan at 3:50 PM 30 comments:

Email ThisBlogThis!Share to TwitterShare to FacebookShare to Pinterest
Labels: Oil painting beach scene, oil painting on linen, persevering in a state of rest

The model at last Wednesdays portrait session was a local celebrity. His name is Bob Carroll and he is a Reno radio personality. He is still broadcasting at 78 years old although he suffers from macular degeneration and diabetes. He is a handsome and regal man who knows everyone who is anyone in Reno and was a delight to draw! I had time for two sketches and am pleased with my likeness this week - thank goodness. 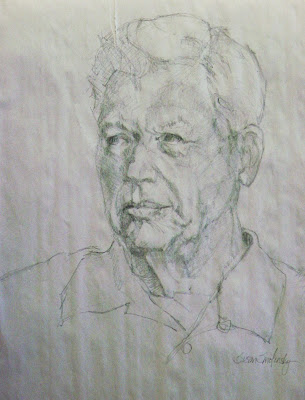 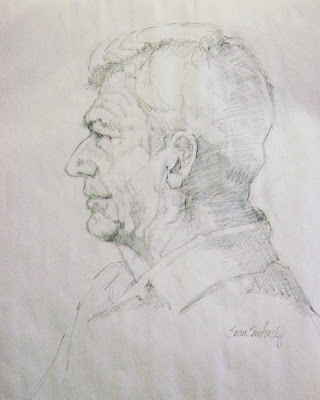 Although I have not posted much recently, I have not been away from my oil paints and my easel. I have been doing a flurry of practice portraits and am working on a larger (18x24) figurative piece.  I have not had much time to photograph my work but will try to show the finished figurative in the next few days. Of course, tomorrow morning is another portrait session. Time certainly flies!
Posted by Susan at 6:38 PM 16 comments:

In open studio today, I really struggled to get a likeness of the model. I can't blame the lighting, my positioning, the paper or the pencils -  I take full responsibility. She was young and beautiful with dark shiny hair but, for some reason, she just eluded my grasp. I tried two 3/4 views without success and then threw my hands up in desperation and did a quick 25 minute sketch of her entire figure. 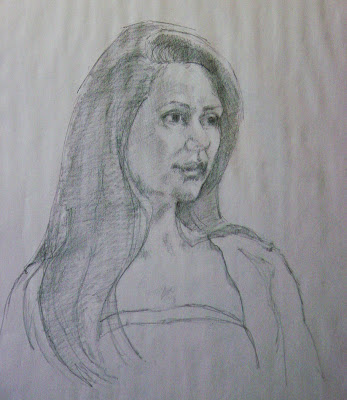 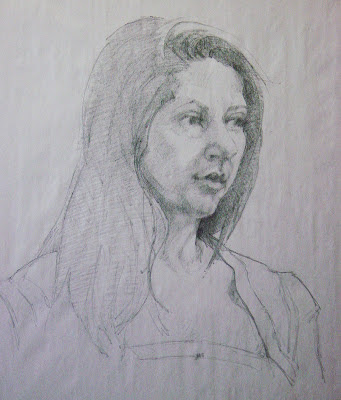 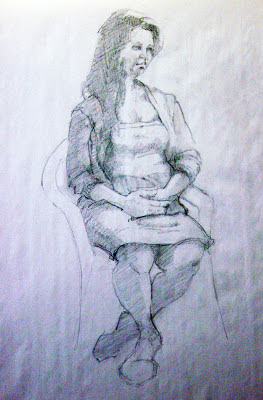 Yesterday, I was in the mood for experimentation and spent the afternoon practicing the portrait in oil using only 4 colors - titanium white, light oxide red, cadmium yellow light and ivory black. It's almost magic how many colors you can mix from just those 4. That part went well, however, as it was just a practice piece, I flipped over an old piece of canvas to use the back entirely ignoring the fact that the canvas on the back is unprimed. Now I know why artists use primed canvas. The raw canvas just sucked up the paint no matter how thickly I tried to apply it - and the paint grabbed the surface so firmly that it was impossible to push the paint around. I continued with it as I was really happy with my likeness of this model but after struggling for about 3 hours, I finally gave up. Oh, well. Live and learn and tomorrow is another day! 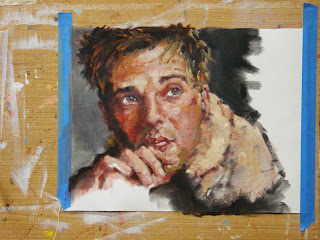